“Slowly I learnt the ways of humans: how to ruin, how to hate, how to debase, how to humiliate. And at the feet of my master I learnt the highest of human skills, the skill no other creature owns: I finally learnt how to lie.”

I will preface this by saying that I had no prior knowledge of Frankenstein. I had never read the book or seen any of the film/tv versions of Mary Shelly’s celebrated novel. In fact, my only familiarity with the “creature” was from Halloween costumes and the TV show The Munsters (Herman Munster). The version of the production we saw featured Benedict Cumberbatch as the Creature and Jonny Lee Miller as Victor Frankenstein.

Running ten blocks in the pouring rain, we raced towards NYU’s Skirball theater in the hopes of not missing the start of the show. For some odd reason, we seriously thought he would show up, make an appearance, thank the audience for attending. He is after all in NY. Riding roller coasters. Taking the train. Letting his friend post photos of him on twitter while he enjoys the town. But alas, sweet Benny wasn’t there. Instead, the audience sat——some, like Jen and I, soaked and wet——as the house lights dimmed, heartbeats began to race and Benedict Cumberbatch’s creature was born. 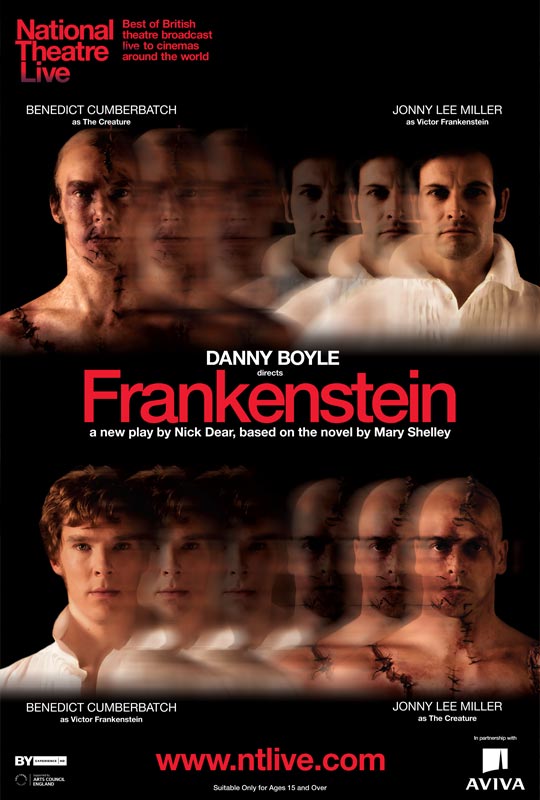 From the moment it starts, Danny Boyle’s production of Frankenstein is a gripping tour-de-force. The first fifteen minutes feature Cumberbatch’s creature, thrashing about the stage, stumbling, crying out—in pain, in fear, for help. As the atmosphere around him changes–lights spark, the room darkens, a train enters–no words are spoken. Instead his body does the talking. The awkwardness of his movements; the violent contortions of his body, the agony, the rawness of it all, and his nakedness. My lord, the Cumbernakedness.

The creature would wear a Jesus type loin, diaper cloth sort of thing for the televised performance. But watching Cumberbatch throw himself onto the ground repeatedly made me wonder, how on earth did his body handle that punishment night-after-night. In the actual production he did the first 15 minutes completely naked. Ay!

And its in this violent and vulnerable manner that the audience is introduced to Victor Frankenstein’s creation. After struggling to find his footing, he takes his first steps forward—an awkward sideways stomping, booty popping sort of motion, with his hips moving side to side—incredibly reminiscent to the gait of a child taking its first steps. And that may actually be the point. The creature is a child, just born, finding his footing and place in the world. And like any child, he seeks affection, understanding and love, especially from his creator. But his creator, Victor Frankenstein, runs in horror when he sees him, thrusting the poor helpless creature out into a world that beats him, fears him, calls him ugly and turns him into a monster.

Unlike me, you likely know the story, so I’ll spare you the details. But I would like to take this time to praise the performances. Cumberbatch has this power to literally draw you in. From the moment his finger moved across the paper womb-like sphere concealing his creature at the start, you’re on the ride. They say the best actors make you forget they’re acting and Cumberbatch’s acting abilities are so good, you forget you’re watching Benedict Cumberbatch. He disappears completely and what stands before you is this whole other being, this nameless creature that never asked to be created, but now that he exists, just wants love, companionship, friendship and acceptance. Its quite thrilling and really a credit to Cumberbatch’s abilities as an actor. You feel bad for him. You cheer him on. He makes you laugh. He makes you cry.  You’re horrified by his actions and yet you grow to love him. You feel all of that in two hours. I was emotionally exhausted afterwards.

Jonny Lee Miller, too, did a wonderful job. While his Victor Frankenstein is perhaps the lesser interesting of the two major roles (The Creature is the heart of the show and its major focus), Miller manages to inject him with passion, intelligence, vigor and yet underneath the surface is a man filled with trepidation, anger and on the verge of insanity. He is quickly falling apart.

The real credit, though, for the show’s awesomeness must go to director Danny Boyle, who manages to bring forth a mesmerizing journey, and of course writer Nick Bear, who adapted Shelly’s novel. Bear’s script is brilliant with lines that stay with you long after.

No word is wasted and is completely necessary is moving the story forward. Every stage direction, every glance, breath, word and shriek is vital and captivates the audience, making you feel and fear, love and hate.

Frankenstein takes you on an emotional journey, shaking you violently, hugging you tightly and taking your breath away, with every beat. If you haven’t had a chance to see it, do yourself a favor and head to the theater closest you (that’s playing it) and get on the ride.

I promise, the performances and atmosphere will resonate with you long after you walk out of the theater.

One thought on “The genius of Danny Boyle’s Frankenstein”